Posted on August 25, 2019 by janisselbyjones 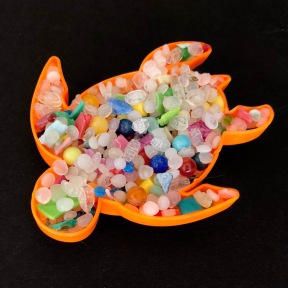 More than half of the world’s sea turtles have ingested plastic, and sadly, they are especially susceptible to its harmful effects.

According to Sea Turtle Conservancy, their anatomy prohibits the regurgitation of debris, and the accumulation of plastic in their stomachs not only disrupts digestion, it can lead to “bubble butt syndrome.“ One way this occurs is when the decomposition of debris in a sea turtle’s stomach causes the development of an air pocket of trapped gas. The trapped gas can inhibit the animal’s ability to dive, and a sea turtle that is unable to dive will not be able to thrive.

The tiny bits filling up this toy turtle are microplastics, which are plastics that are less than 5mm. The colorful pieces are the result of the photo-degradation of larger plastics, which fragment into smaller and smaller toxic bits. The opaque rounded pellets are nurdles, which are “primary source microplastics.” In other words, they were originally produced to be 5mm or smaller. Nurdles are preproduction plastics used to make other plastic products. They are often spilled during manufacturing and transportation, and when they enter waterways, they can be swept out to sea. Watch the short animated TED-Ed video called Nurdles Quest for Domination for more information.